Truong Kim Toan, 82, teaches regular yoga classes in Hanoi, which he said is his secret to a long, active and happy life. 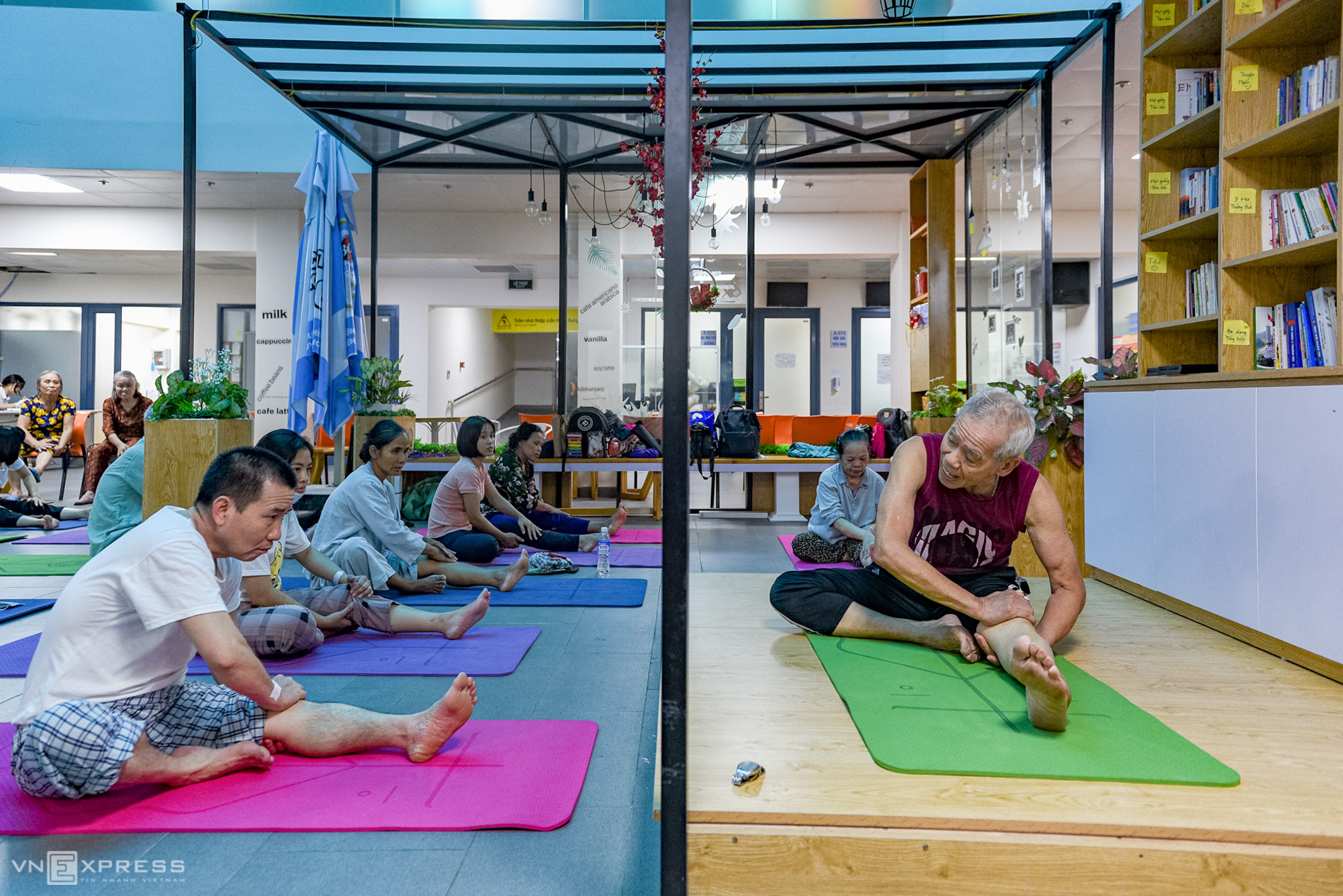 “I’m one of the three instructors here. We have three rotating sessions per week,” he said, adding the class opened over two months ago. 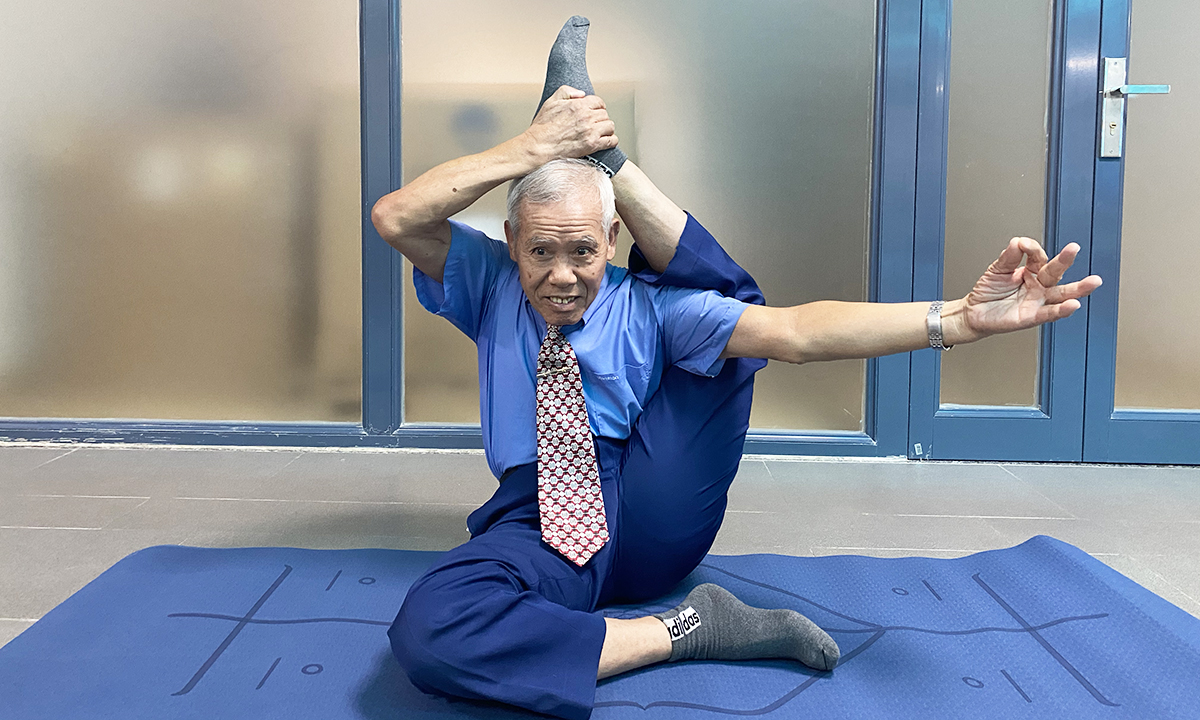 Toan performs the compass pose during a class at the hospital.

At 82, he is the oldest yoga instructor in Vietnam with 23 years of experience. Aside from teaching yoga, he trains yoga instructors professionally across Hanoi.

Photo by Thuy An 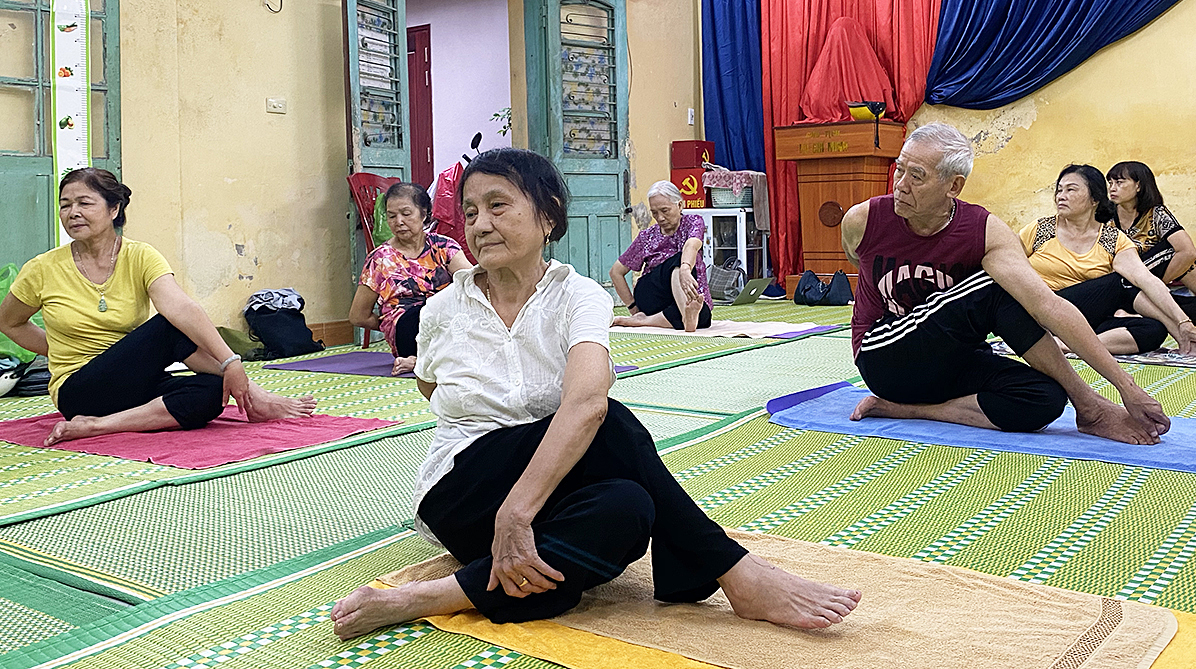 Bui Thi Lien, 80, (front) and other students perform a twist during another class of Toan on Ly Nam De Street, which has been open for 15 years.

Lien had a serious joint disease but her condition improved after two years of yoga. She attends two sessions per week and practices at home during her free time. She can now walk more comfortably than before.

She said attending these classes helps her improve her heath and make new friends.

Photo by Thuy An 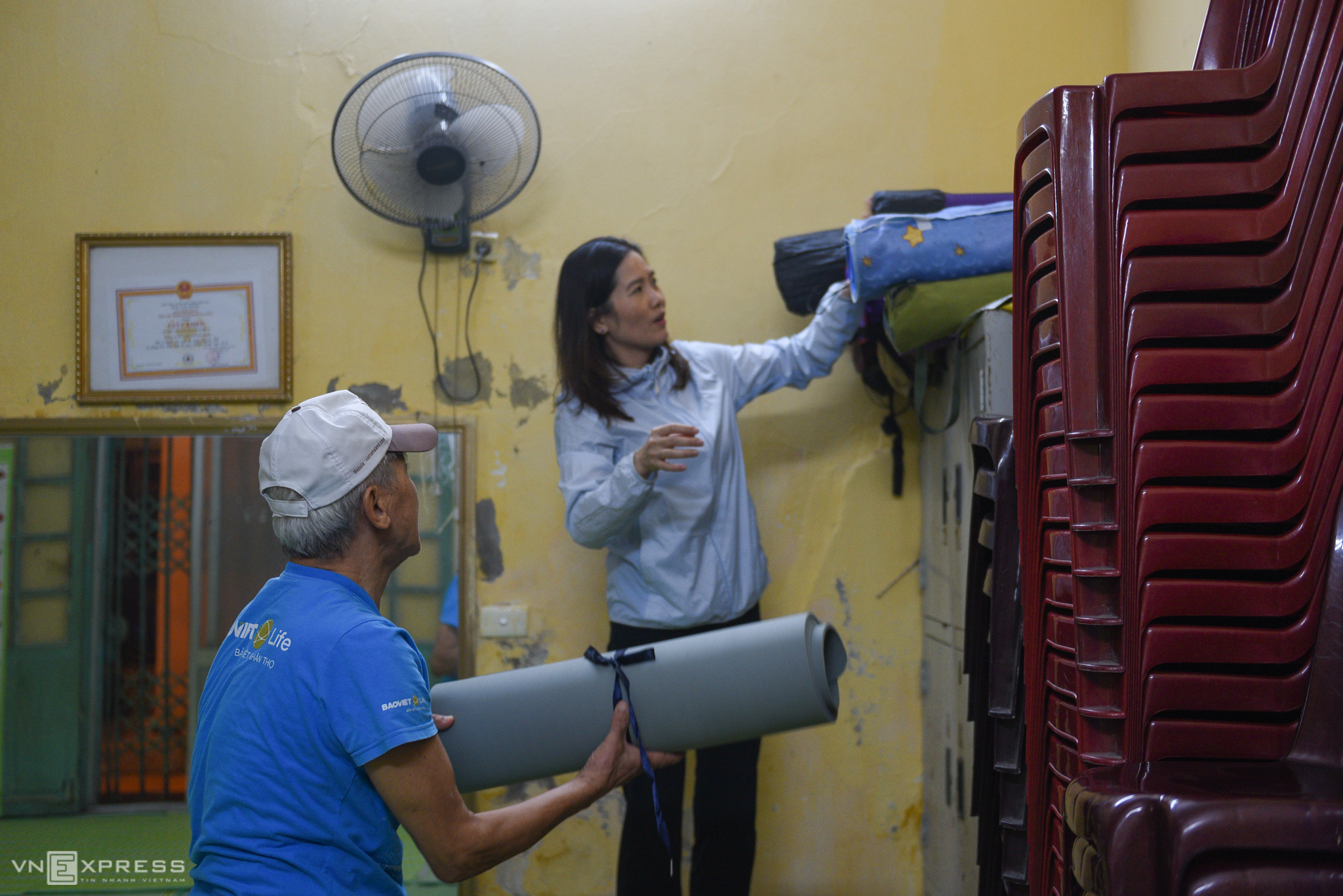 Toan arrives 15 minutes before class to set up mats, clean the space, and enjoy some small talk. 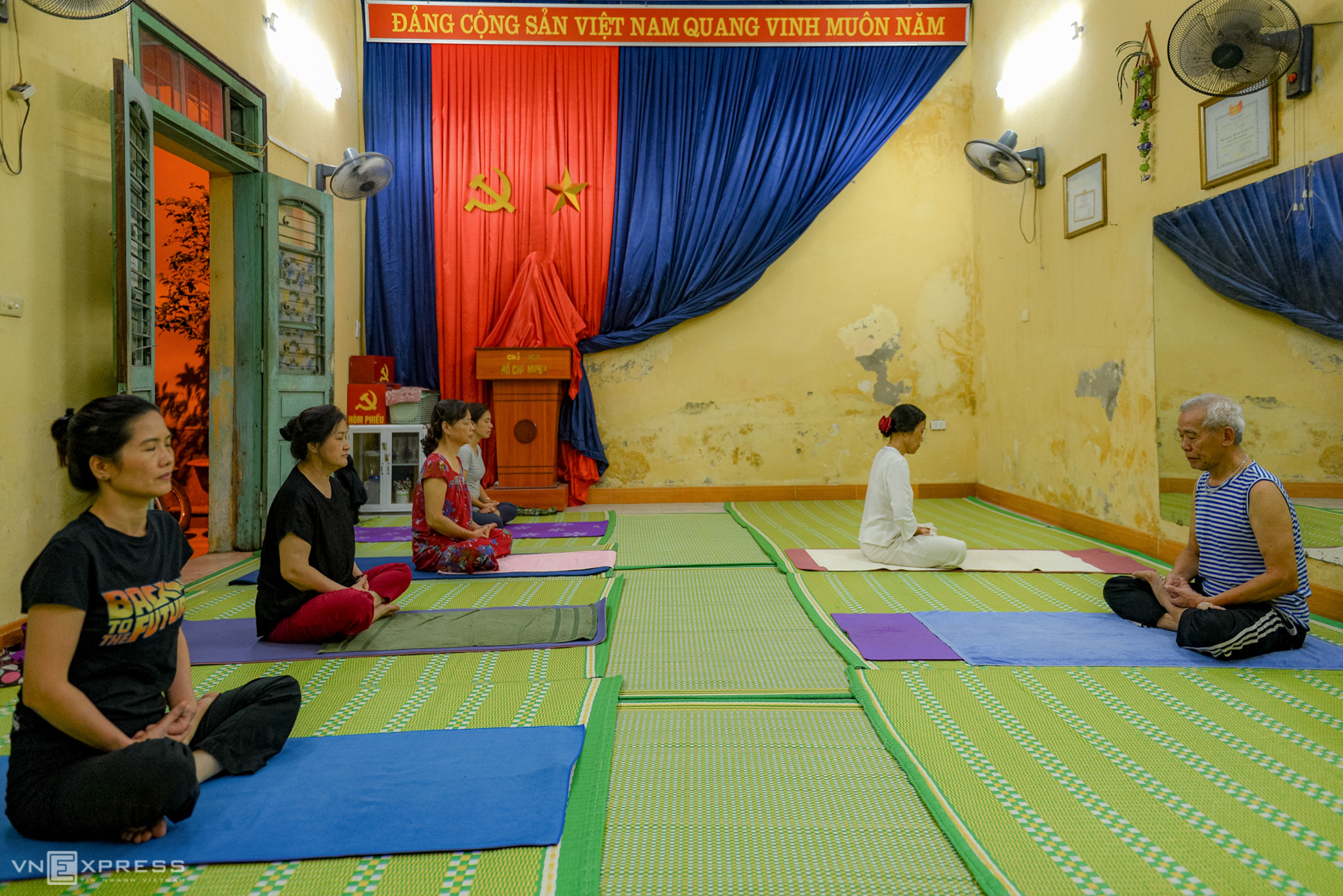 The class begins with everyone meditating, which helps promote concentration.

“Yoga is not just about stretching. Practitioners have to learn meditation and breathing techniques to fully engage with the practice.”

He added one should not eat for at least three hours before class in order to benefit the digestive system. 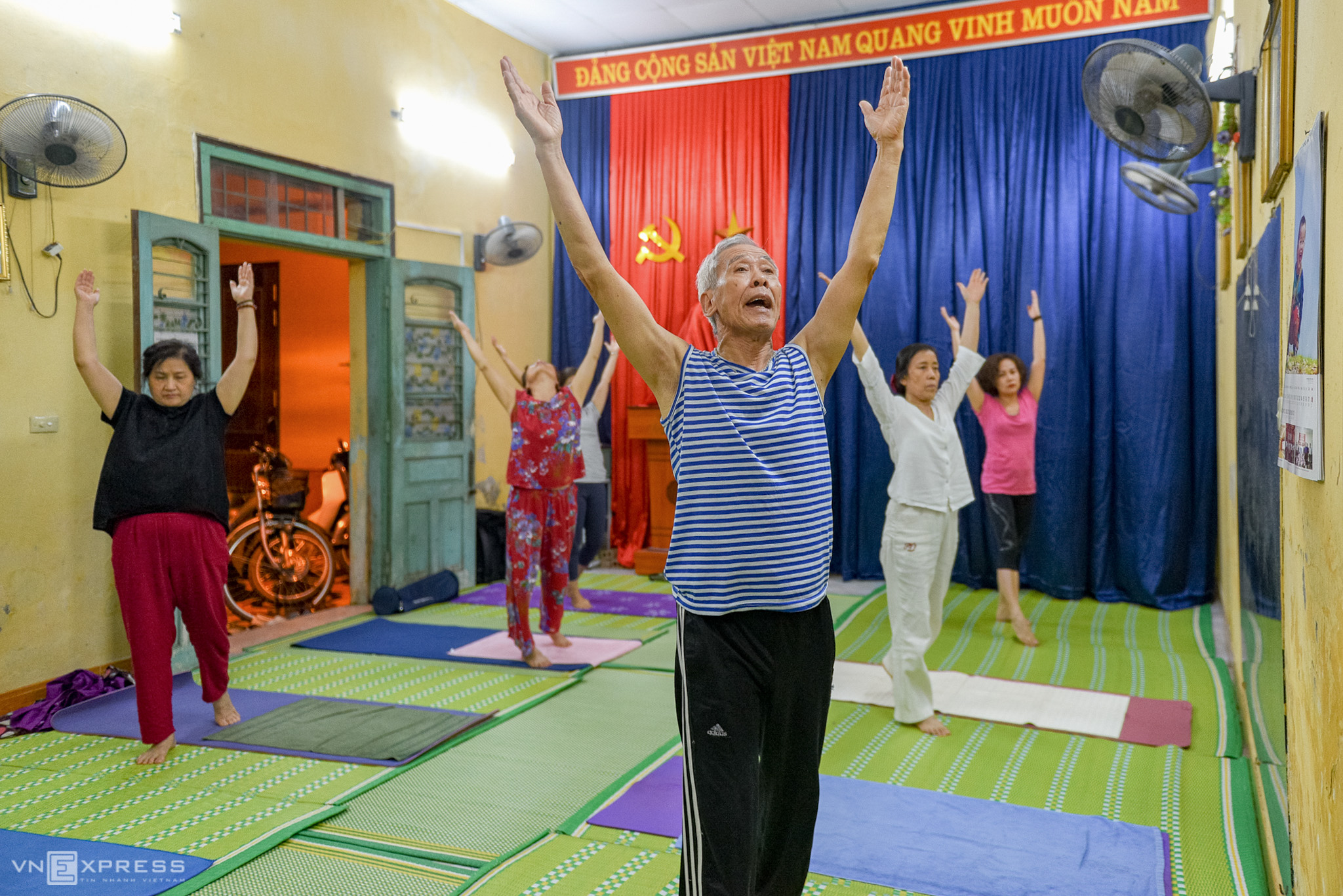 The class has 10-15 students and lasts for 75 minutes, covering different poses, stretches, and body relaxation methods.

“I teach using both beginning and advanced movements so people with different stamina levels could follow. If any movements are too difficult, I tell them to do it gently and little by little to avoid injury. Practicing yoga is not a matter of a day or two. So don’t try to rush the process.” 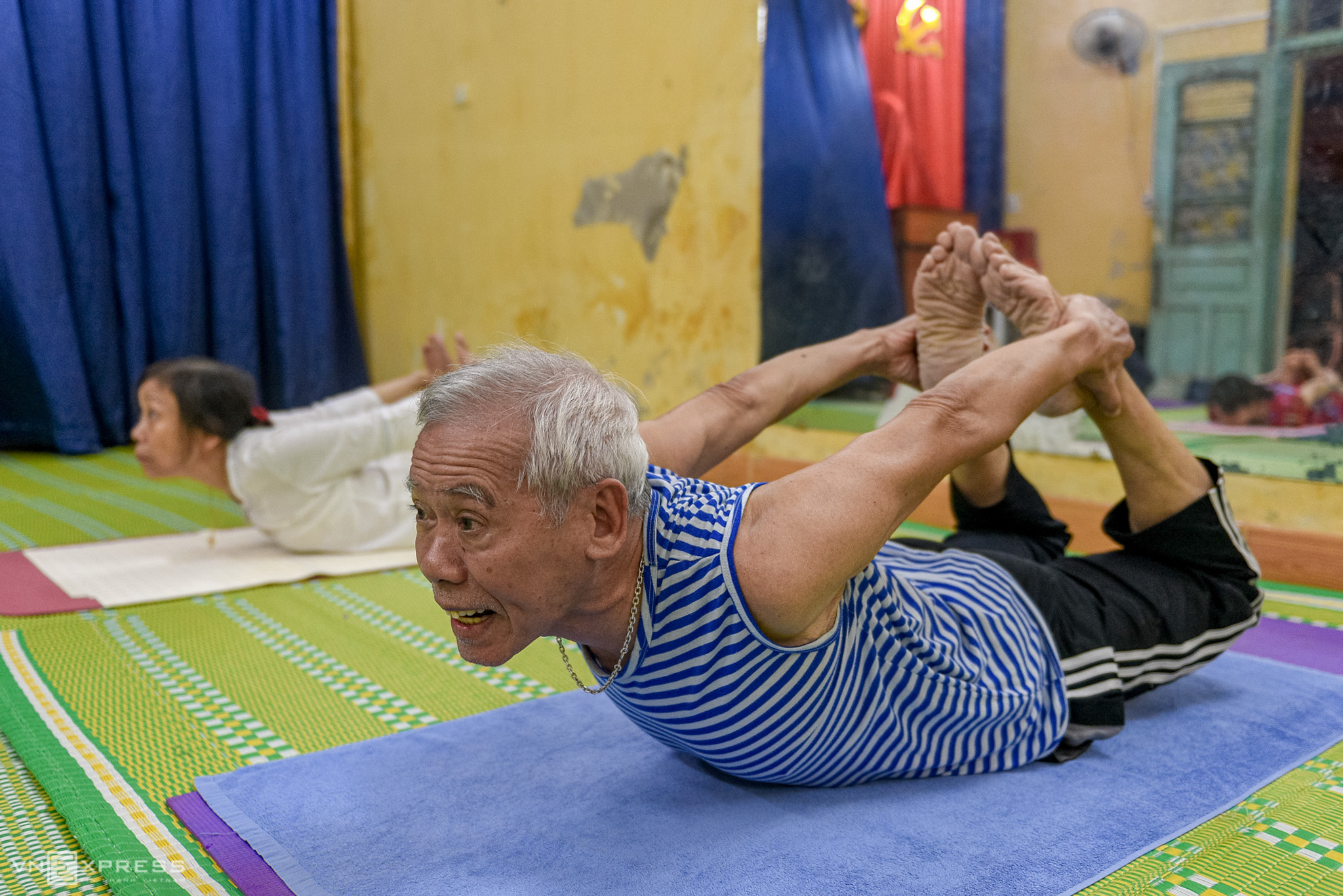 Toan performs the bow pose for students to follow.

“Thanks to yoga, I have a healthy body. I still have a hospital’s health examination book from 1984 with many empty pages left,” he said, stating he was proud of still being able to freely move around at his age.

He rides a bicycle to his classes every day. 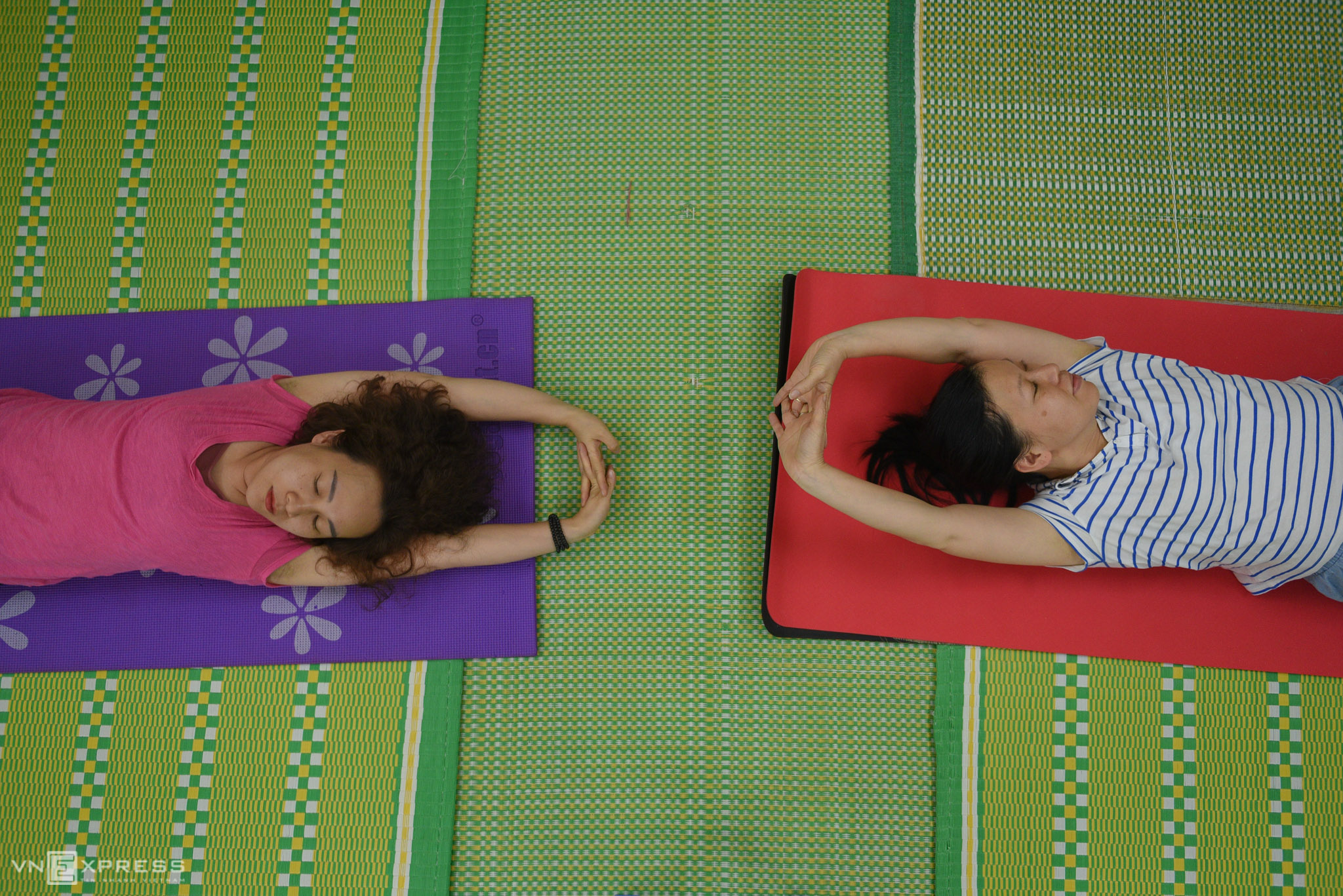 “I used to practice a number of disciplines but later stopped since I fell pregnant. After, I trained at the gym and other health facilities, but those places soon proved unsuitable. I find Toan’s yoga exercises fit my current physical condition, which are not too heavy but effective,” she said.

At the end of the class, he records those students who showed up. Even though his hands shake a bit, he can still write neatly. 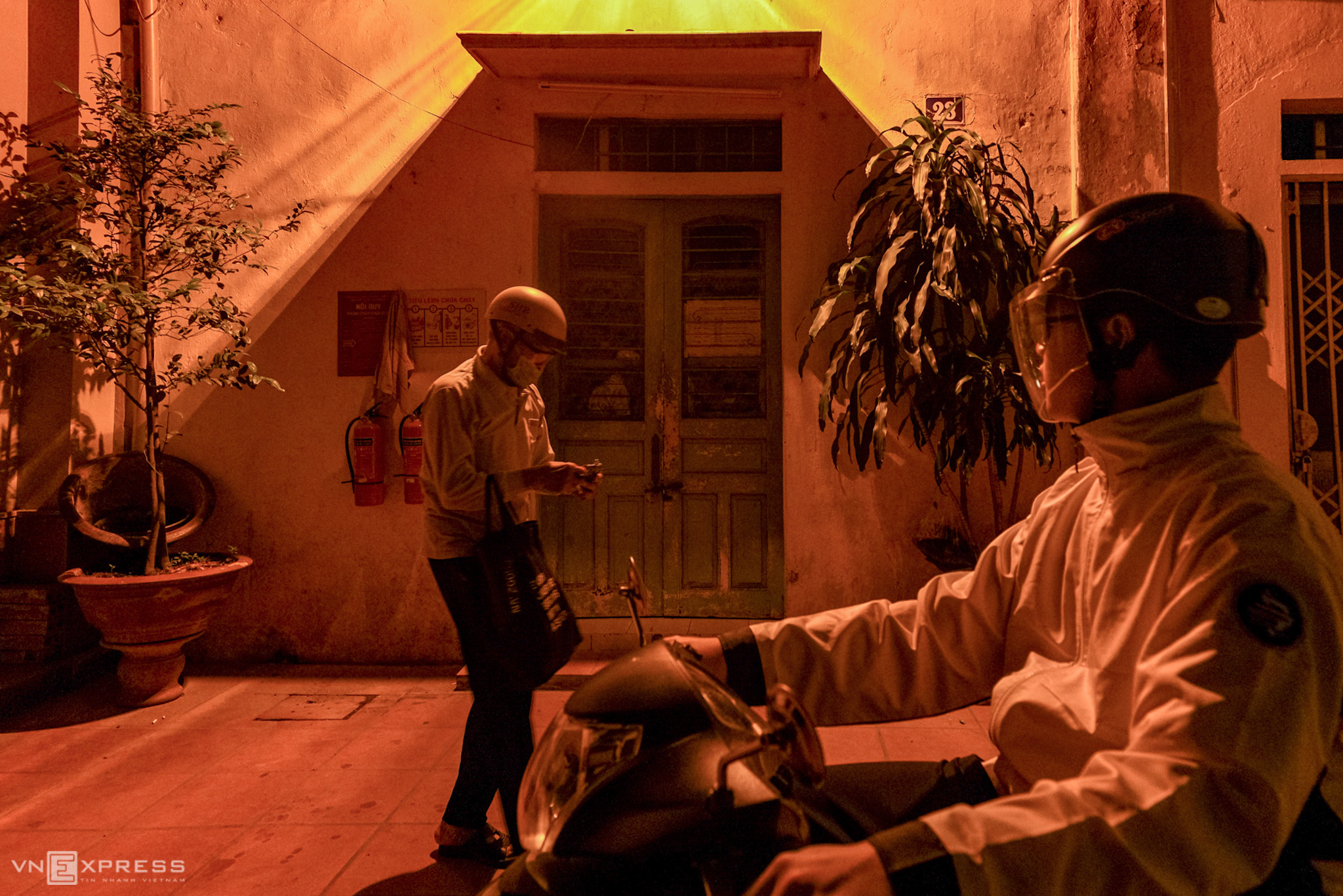 Once the class is over, he cleans up, turns off the lights and locks up the space before heading home.

“I am still very healthy. I can walk around without a cane or help from my children and grandchildren.” 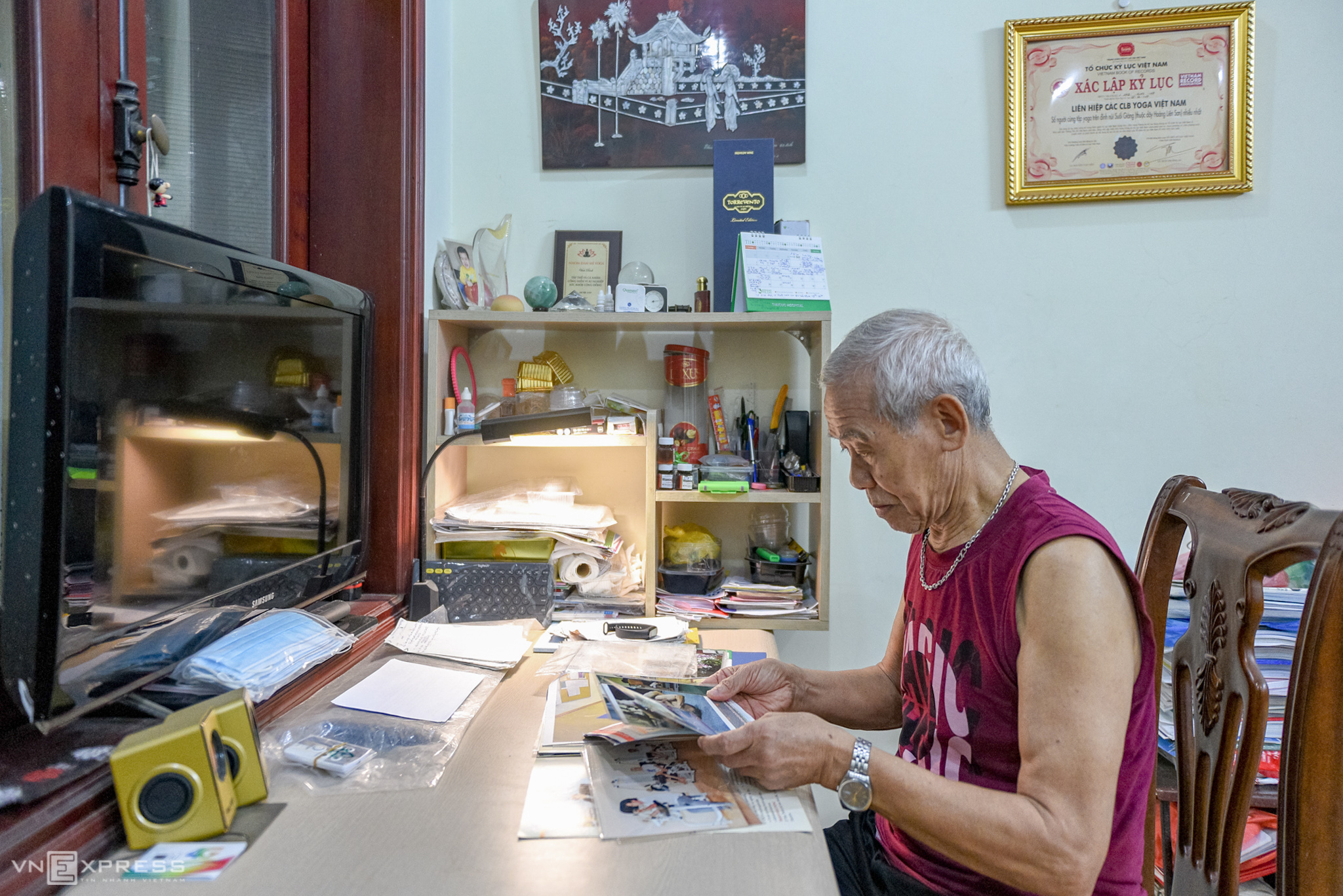 Toan said he still has good eyesight and can watch TV or use his phone without glasses.

He often organizes and looks at old photos and documents related to his 65-year journey of pursuing sports whenever he has free time, which he considers his “treasure, memory, and pride.” 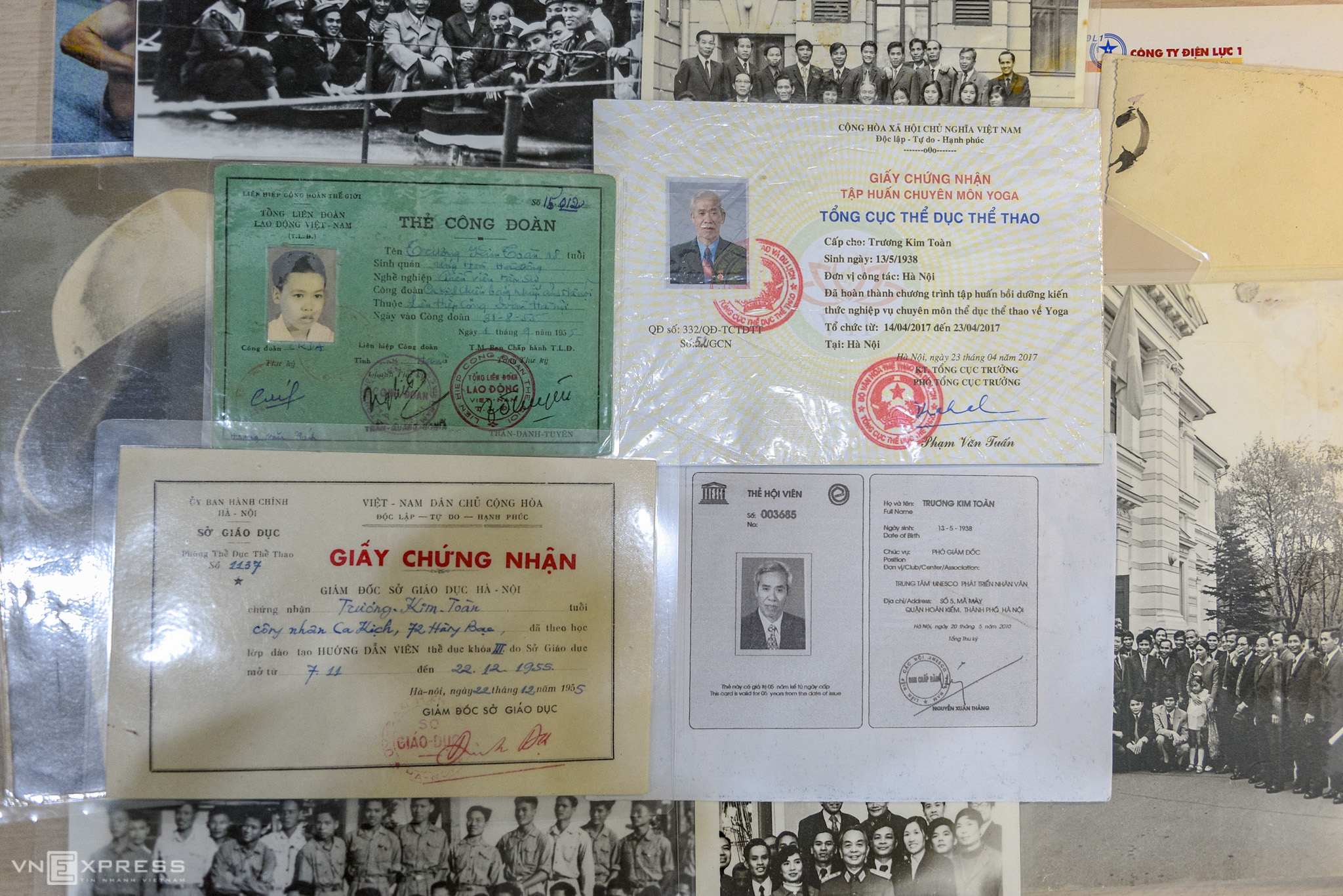 Old pictures, achievement certificates, and other documents related to sports he received during his time in the military or from Vietnam Sports Administration.

“I even won first prize for swimming 400 m in 1960. I picked up yoga in 1997 and have been pursuing it until now. I have a healthy body thanks to always being active. I will keep doing yoga as long as I can.”

He shared that he always encourages family members to do exercise, adding his grandson sometimes even attends his yoga class.

“It doesn’t have to be yoga. Any disciplines are fine. I am living proof of that.”